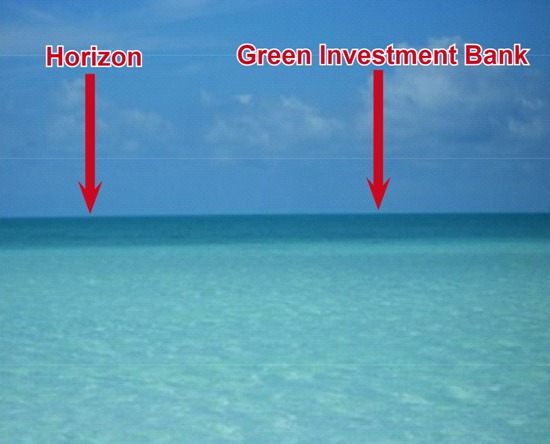 I’ve put up a few posts on the Green Investment Fund, or Green Investment Bank as it is sometimes known. It will become a Green Investment Bank of course, as I posted (here) when the prospectus document came out , by 2015 or when the Treasury decides that ‘the target for debt to be falling as a percentage of GDP has been met’. At that point all the big leveraged lending comes in, along with  bond issuing, all the singing and dancing that we’d expect for such a bank. The Green Deal could be helped by GIB for example.  So could large wind and other renewables. Once it’s a proper bank, that is: until then the GIF will advance funds from a pot that might reach £3 billion by 2015.

Clearly, as a result of the Autumn Statement yesterday, there is now no prospect of that careful Treasury formula for the Green Investment Bank’s emergence to be met until at least 2017.  Will GIB then be just a GIF until that point? If so that could be a real problem for some of the assumed investments already being talked about: or will a more flexible formula be wheeled on? I don’t know, but we should certainly be told.

Despite my last post, overall, I am warming to the GIB. The accompanying document released with the announcement of the detail of the GIB (here) said all the right things about what the GIB should be doing, and for the first time set out a timetable of how investment were going to be rolled out.  And at least we will have £3 billion of investment to be getting on with, whilst the bank actually becomes a bank, if you see what I mean.

But there is as ever, a harvest of details to be gleaned from such documents. The most striking detail, mentioned only in passing in Vince Cable’s statement to the House is that there is still no clearance, or even understanding from the EU commission about whether the GIB as it will be constituted, breaks EU state aid. Indeed, it is not even clear whether the subject has yet been broached with the EU by the UK government. It certainly hadn’t when BIS officials appeared in front of the Environmental Audit Committee a few months ago and were asked about progress. EAC wanted to ask the question because it had received information that when the German investment Bank KfW developed its proposals for supporting energy efficiency improvements in German homes, and engineered the ingenious method of obtaining Government underwriting for loans to reduce the interest rates charged, they explored thoroughly the state aid implications with the EU Commission in advance of proceeding, and had, essentially, obtained an ’all clear’ before they started.

Not so the GIB apparently. According to the document, we will not know whether the EU will give a similar ‘all clear’ until ….well…at least 2012, and this will seriously affect the pattern of investment. The Department will, it is suggested undertake some ’investments’ which clearly do not breach state aid rules at an early date, and will subsequently hand them over to the GIB when it gets into the air.  This is, then, an additional stage of the pupation of the GIB, from furry caterpillar doing bits and pieces with the £775 million obtained from the sale of Fast Rail2 to the fabulous soaring butterfly promised after 2015 when it will be able to borrow, produce bonds, act like a bank etc. etc.  Not quite so either, I am afraid. As I previously posted, there was a query about whether the birth of the real GIB would be 2015, as suggested in the official initial announcement, or when the treasury formula of ‘the target for debt to be falling as a percentage of GDP has been met’ had been achieved.  Another piece of uncertainty cleared up in the details document: it’s the latter (See chart 3 p.25). Treasury still decides. Or may not. But before that the EU decides. Or may not.  Just the sort of clarity that will get the investors pulses racing, I should think.

It was interesting to see Nick Clegg given a day out with the Green Investment Bank last week. We had him ‘announcing’ the detail of the GIB in a speech to climate Change Capital on May 23rd. As far as I am aware, he hasn’t had any hand at all in the development of the bank or its details, so an obvious choice to make the announcement then….. But maybe there’s something else there that I missed. Nick was, of course effusive about the GIB , and encouraged us not a little by telling us that ‘ we are….looking at the potential for using the bank to help deliver the first stages of the Green Deal’.

That could be good: we’re just going into the Committee stage of the Energy Bill with a lot of questions about financing hanging over the proceedings, and the emergence of the GIB as a possible aggregate guarantor or funder of Green Deal packages would, among other things enable the interest rate levied to be stabilised or reduced, and get much more steam out of the Green Deal machine.

But wait: anxious to hear confirmation of Nicks good news from the mouth of Vince Cable, the person who was really announcing the detail of the GIB in Parliament the next day, Labour’s Luciana Berger asked whether GIB really was going to underwrite packages for the Green Deal.

‘There has been no change to the policy. The Green Deal has a very sound business model. It will proceed and it will be successful. We do not rule out the possibility of the Green Investment Bank complementing and working with its activities’, said Vince. (trs. nte: blvd OE. Rare. Usually translated as ‘probably not’).

So that’s cleared that up. We’ll have to wait and see, I guess.