This piece originally appeared in BusinessGreen on 24th March 2016

Well it wasn’t a very green Budget, was it? I know that to ask this question in light of the other rather explosive elements of the Budget is to pose a modern day version of the question ‘other than that, how was the play, Mrs Lincoln?’ Nevertheless, I would have thought that, with all the rhetoric surrounding the outcome of the Paris climate change summit in December, there might have been rather more ‘getting on with it’ measures in the Budget.

As it was, under the box marked ‘energy’ we were treated to the abolition of the Carbon Reduction Commitment, and some compensatory tinkering with the Climate Change Levy, a pledge to enhance interconnection levels, albeit at no cost to Treasury UK, and a commitment to allocate £780m to support offshore wind and ‘less established renewables’ over the next period of the Levy Control Framework (LCF).

That bit sounds quite green, I grant you. The idea that there will be further CfD auctions between now and 2020 is not new – Amber Rudd mentioned that there would be new auctions last October. But the source of the £780m for offshore wind looks like it be from the next LCF phase, since it will be for plant becoming operational after 2021.

Policy Exchange has tried to work out where the LCF will stand by 2020 – and they suggest that, whilst the cuts to onshore wind and solar might have pushed it below the 20 per cent ‘headroom’ level above the £7.6bn allocated for it by 2020, it is still ‘overspent’ by about £1.2bn – a sum that, on present definitions, DECC will have to ‘claw back’ within future limits that are as yet unset. 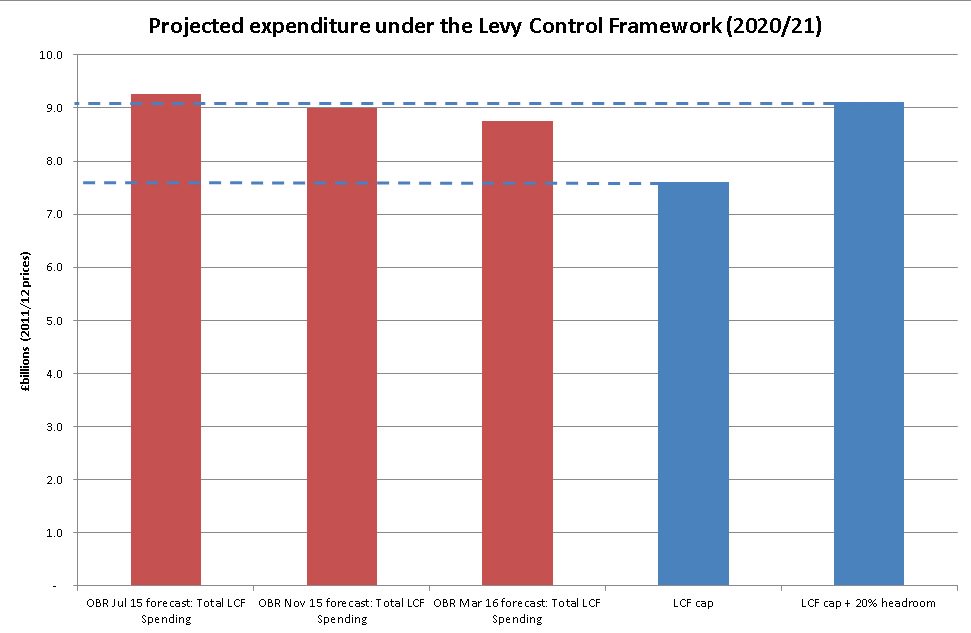 Whether the LCF is really overspent and what its consequences might be is a matter of conjecture, since its calculations are now so opaque that it does require some reasonably heroic assumptions to get inside its workings. This is a conclusion shared, apparently, by the Office for Budget Responsibility when it notes in its ‘Economic and Fiscal Outlook’ accompanying the Budget that the complexity and commercially sensitive information used by DECC ‘reduce the transparency of the forecasting process’.

So what might be available for onshore wind after this initial allocation – which is essentially a downpayment for future wind deployment in the 2020s – remains very uncertain.

We ought to note in passing that the formula set out for these future auctions by its definition excludes any onshore wind or larger solar from bidding for the remainder of the LCF. They are not, after all, ‘less-established renewables’ so that is the end of them, it seems, as far as Contracts for Difference auctions are concerned. This seems quite perverse, since they are by far the cheapest renewables around currently, and in any all-in auction would certainly come in substantially below the £105 per MW hour that Treasury envisages will be the maximum cap for offshore wind that the next auction will be set against.

So how much offshore wind would these auctions up to 2020 procure for delivery in the early part of the next decade? RenewableUK’s estimate, immediately after the Budget, is that the sum might account for about 3.5GW of installed wind between, say, 2021 and 2025. Mind you, this estimate is based, it seems, on the assumption that all the remaining LCF levy funding will go to support offshore wind, and not some of the other ‘less-established renewables’ mentioned in the Budget Red Book (how, for example, Swansea Bay or indeed any tidal energy might be fitted into the framework remains unclear). However, it does give us a clue as to what is still supposedly out there for the LCF to accommodate in the 2020s if we ever get to hear what the next LCF framework level is actually going to be, which I have to say would have been useful and comforting to hear in this Budget.

Amber Rudd, in her energy reset speech in October, hinted strongly and to some approval from renewable groups that there would be room for perhaps 10GW of new offshore wind in the 2020s – subject, she said, to ‘the cost reduction we have already seen accelerating’, leaving something like 6.5GW outstanding on a promise to be accommodated by the 2020-25 LCF, if and when it turns up. In light of the continuing claims of overspending on the LCF as it stands, this looks to be quite a tall order, unless the basis on which the LCF is set is changed.

So, some offshore wind to come in the early 2020s, at the expense of no further onshore or solar developments related to CfDs. And then a cliff surrounded in fog as to how any further developments might be accommodated, even at the Treasury’s putative suggestion (in the Red Book) that limits for offshore might be pushed down to £85 per MWh for projects ‘commissioning after 2026’.

Not a very green Budget, then. But it could have been a little greener if we were party to the great mystery of our time: namely, how the LCF will be managed over the next 10 years. Someday we will find out, and at that point we might (or might not) be a little happier about things.