Those wacky funsters in the DECC amusing graphs department have come up with another good one. Not quite in the league of the graph I posted on a while ago on Green Deal and DECC, but pretty good, nevertheless. This one, from the newly published Technical Update on Electricity Market Reform purports to explain how the new system for FiT ‘Contracts for Difference’ and the capacity mechanism will work in the new reformed Electricity Market Reform programme.

And here it is, rendered into English. 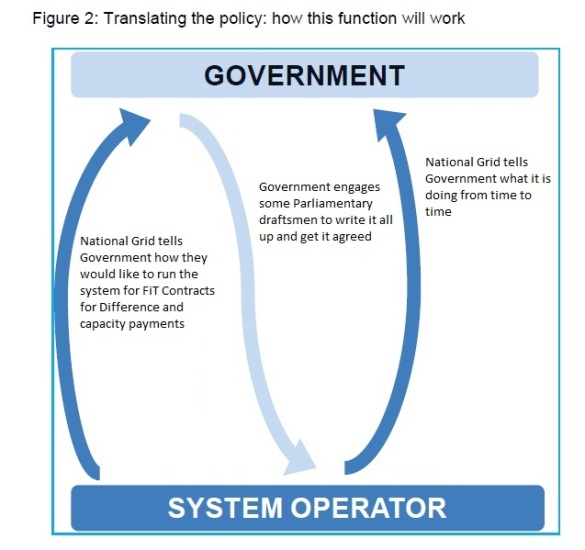 It is clear from the document (and the chart, once you translate it) that the intention is effectively to give the running of all the machinery of Contracts for Difference and capacity payments over to National Grid Plc, including design of the system, operation, giving out of contracts, auctions of capacity payments, and the payments and collection of contributions themselves.  Might there be some conflict of interest?  Well, DECC has thought about that. “Giving the system operator influence over the type and location of generation and the capacity margin raises potential or perceived conflicts of interest with National Grid’s existing functions and businesses,”  they say (quite rightly, in my opinion) and then they list just what those businesses are.  “…including,” they say in a footnote “National Grid’s role as transmission owner for England and Wales (including responsibility for network build), National Grid’s existing and potential role as Offshore Transmission owner, National Grid Carbon Ltd’s potential role as Carbon Capture and Storage Infrastructure owner.”

But not to worry. They’re going to “carefully consider any potential conflicts of interest and possible mitigating measures.”  They’re starting a project to do just that, with the full project expected to take “around a year.”  So that’s, let’s say, next Christmas: by which time, as the document proudly states, legislation will have been through the House to put everything into law.  Hmm. Not sure this really works, DECC, and you may well regret giving huge chunks of the electricity market management system over to one of the players within it.  Better have a good think about it earlier, rather than later, in my view.

One thought on “National Grid: Control Through Amusing Charts”