Well we’re now deep into the Energy bill committee. And quite a jolly affair it is, in many ways. Having sat on a number of Bill Committees each has its own ‘atmosphere’. Sometimes it is sour and rancorous, sometimes earnest, sometimes rather cordial all round. I would put the current committee into that category – it doesn’t mean that the debate is less focussed, or the amendments less hard-fought: but the general atmosphere of a Bill committee does enable some things to happen on the margins that might not otherwise, and I think in general there are some moves to accommodate some well-put points into the bill’s structure that might be lost if the purpose of the session was seen by all to defend a line at whatever cost. Perhaps the Health Bill, shortly to be reconvened in committee could have come to less grief if that had happened during its proceedings…..

We are at the time of writing this, just about to come to the sections of the bill that deal with the Energy Company Obligation. I hope we can shed some better light on the Energy Companies Obligation, which is rapidly becoming the centrepiece of obscurity on the bill as a whole. Just what is it about?  Is it a measure simply to scoop up funding for those hard to treat homes that might not fit the Green Deal bill, and if so will large numbers of people who can pay for improvements get a free shot at additional improvements whilst others, in fuel poverty, perhaps get nothing?  Is it really and primarily for those who can’t otherwise afford Green Deal type arrangements, but who also may be in hard to treat homes?  Will there be any money to speak of in ECO anyway, after Treasury has had its way? No-one seems really clear, and the delegated nature of much of the legislation on ECO means that we won’t probably be much the wiser for some time. This looks like it will be a problem, since it is one of the areas that a number of people are beginning to make tentative plans on, only to be set back by the fog surrounding it. This at least, was the message sent across to me at a conference I spoke at just yesterday.

Perhaps the best (unintentional ) go at making matters less clear turned up in the helpful booklet the scribes below DECC have produced to accompany the committee stage of the bill. Entitled Extra help where it is needed: a new Energy Company Obligation (you can find it here). It contains a wonderful diagram that is so wonderful I’ve reproduced it here: 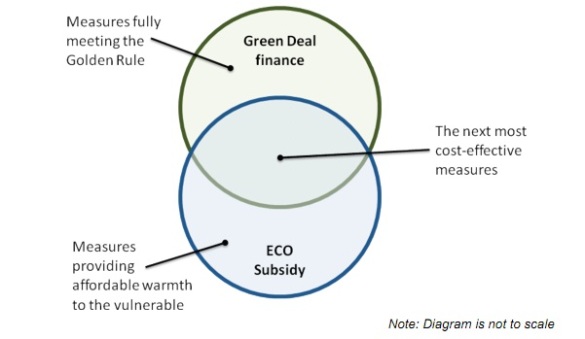 I love the note at the bottom: ‘Diagram is not to scale’. Too right. Especially when bearing in mind what it says on the very next page after the wonder diagram; ‘2.3 million solid wall homes will need to have taken up solid wall insulation by 2022 in order for the UK to be on track to achieve carbon budgets’. That might take up pretty much all of the bottom circle for starters: or rather we might represent it thus: 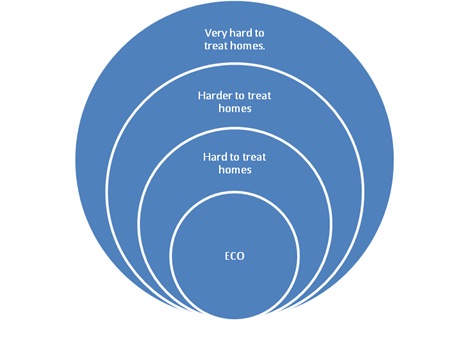 I hope that clears everything up. I’ll be trying to do what I can in committee.

2 thoughts on “How to clear remaining doubts up”